Leadership Aboard the Santa Fe

What is leadership? It’s certainly a fancy term. It adorns countless corporate walls paired with some inspirational message or image. It appears as a common requirement for most management-level job applications. It can even inspire folks to come together in an almost cult-like fashion:

But defining leadership can be tricky. We can use words like humility, decision-making, servant to try to arrive at a definition, but that’s boring and often incomplete. 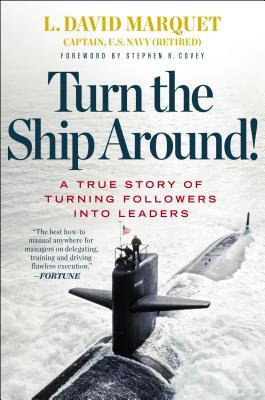 I recently read L. David Marquet’s Turn This Ship Around!, and came across a truly great example of what it means to be a leader. In short, leadership is creating an environment that helps your subordinates grow into becoming leaders themselves. Marquet did this in a seemingly unlikely setting: aboard a submarine in the U.S. Navy.

Here are my main takeaways from the book to how to shift to this new paradigm:

Create an environment of ownership

It’s important that the environment is tailored to allow reports to make decisions and think on their own, but be accountable for their decisions. Marquet encouraged this by requiring his junior officers to recommend what actions to take. Instead of Marquet giving orders, he’d have his reports make decisions, having them say “I intend to” before acting. e.g. “I intend to take the ship up to periscope depth…”, while Marquet would give simple confirmation. Even little things like language can help encourage passive officers to think independently.

Marquet tried out a Leader-Leader experiment on the U.S.S. Will Rogers without much thought into how it was implemented. This led to an oversight in readiness, a failed inspection, and a quick transfer to a Soviet outpost where he could spend time reflecting on just how poorly his first efforts had been. Simply delegating tasks without thought to how they’d be carried out is a recipe for failure.

Once he got another shot aboard the U.S.S. Santa Fe, he focused more on developing the level of competency of his officers. He resisted the urge to dictate solutions to problems, but instead gave his folks latitude to work through issues. As Marquet succinctly put it, “Don’t brief, certify”.

Communication is paramount. Especially for significant changes that are new or uncomfortable, you can never communicate too much what your vision is.

I’ve certainly struggled with delegating, especially on a small team where there’s plenty of work to go around and never enough bodies to do the work. I think I’ve gotten better at communicating context and the necessary details of a particular issue or task, however I know sometimes I’ll lead with my proposed solution without allowing my reports to come up with their own design.

But overall the ideas in this book have helped me start to think more about how I operate and how I can do a better job of creating an environment that creates great leaders.

Marquet’s work resulted in the Santa Fe earning a record number of awards in both excellence and most improved. Furthermore, Marquet’s officers were promoted at unusually high rates to lead their own ships, and applied most of what they learned aboard the Santa Fe to their own ships.

In business, it’s easy to get caught up in optimizing specific metrics, growing profits or increasing market share. But doesn’t that all pale in comparison to helping others grow? To inspiring others to build a brighter future? In that way, leadership can be boiled down to priorities. How you choose to spend your time, what you choose to value above all, and how you choose to impart those beliefs to others.

How do you define leadership?